Kuldeep has now become the only Indian bowler to grab two hat-tricks in international cricket. He is also the sixth bowler in the world to claim multiple hat-tricks

Two years after stunning the world with his maiden hat-trick against Australia, Chinaman Kuldeep Yadav had repeated the heroics against West Indies on Wednesday. During the 2nd ODI in Visakhapatnam, the young leggie scalped three wickets in a row to script history.

Kuldeep has now become the only Indian bowler to grab two hat-tricks in international cricket. He is also the sixth bowler in the world to claim multiple hat-tricks. The incident happened in the 33rd over of the Caribbean run-chase. In course of defending the 388-run target, the leg-spinner took the men-in-blue closer to victory.

Kuldeep’s first prey was opener Shai Hope (78) who had already menaced the Indians with his batting. The batsman attempted for a slog-sweep against the spin towards deep mid-wicket. However, he couldn’t put enough power to clear Virat who was fielding near the fence. The Indian skipper took a phenomenal catch and restricted Hope from getting another ton.

Next in the line was all-rounder Jason Holder who attempted to drive a flighted googly. The ball spun enough to beat Holder's blade and he dragged his back-foot away from the crease. Stumper Rishabh Pant was quick enough to whip the bails off and the batsman was given out after referring to the third umpire.

The final nail in the coffin was hit by wrong'un from around the stumps which bamboozled Alzarri Joseph. The batsman outside edged it to second slip where Kedar Jadhav pouched it safely.

Kuldeep took his first hat-trick against Australia in September 2017 at the Eden Gardens. Playing the MS Dhoni’s captaincy, the leggie removed Mathew Wade, Ashton Agar and Pat Cummins, ending up with figures of 3/54. 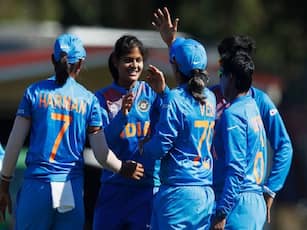